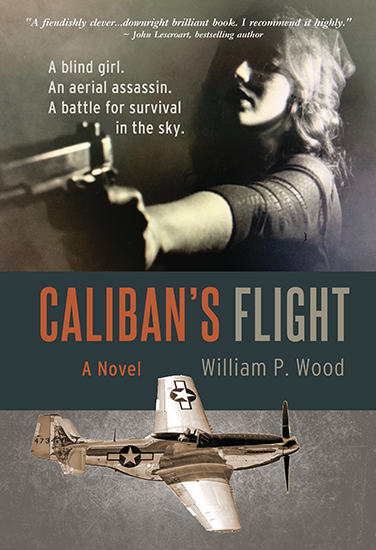 A bungled assassination in Mexico City. A chameleon like assassin code-named Caliban desperately and ruthlessly trying to escape by land an in the air. And Carol Bogart, a tough, smart, young blind woman, risking everything to save herself and her fiancé from the assassin’s guns as she courageously pilots a specially built airplane in a perilous race to get home. Like Frederick Forsyth’s Day of the Jackal, Caliban’s Flight is an action and suspense race from start to finish.

​Caliban’s Flight is the story of two very different unswerving young women. Caliban is a monster, a brilliant and successful killer for hire who has just bungled her biggest assassination, putting her on the run from her employers. Carol Bogart was blinded in a car crash. But she’s fought back to independence in her life. Her dream has been to be a pilot and thanks to her inventor father, she can pilot a specially equipped small plane.

​Carol’s life changes when the fleeing Caliban shows up at Bogart Aviation and charters a plane, the specially built one Nate is designing for the Air Force. Caliban is using one of her many aliases and disguises and she completely fools Carol and her father and the young engineer who will actually fly the plane, Carol’s fiancé Steve. Caliban charms them by revealing she’s a pilot too.

Once in the air, Caliban’s murderous plans force Carol and Steve to fight for their lives.